Through the creation of common ducts and other facilities, the Bureau is proceeding with the removal of power poles by moving power and communication lines that run above roads underground. This initiative aims to strengthen urban disaster functions, ensure safe and pleasant spaces for pedestrians, and create an attractive landscape.

The Tokyo Metropolitan Government is advancing removal with a focus on metropolitan roads completed as city-planned roads within the central core area, emergency transport roads, and heavily trafficked roads in areas near major railway stations.

In order to create a pleasant environment and roads that are visually attractive and lush with greenery, the Bureau is taking an integrated approach to road and sidewalk landscapes, including making sidewalk pavement colorful, planting more greenery along roadways, and installing street lighting. Under the “Symbol Road Development Program,” landscaping is being conducted on twenty routes that act as the “face” of Tokyo. For shopping streets and roads in front of railway stations, there is the “Road Landscape Improvement Program.” 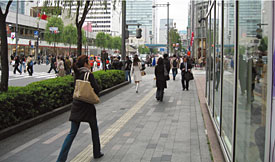