Roads play a vitally essential role as the most basic form of infrastructure supporting the lives of Tokyo residents. This role entails meeting the city’s enormous transport demand, while also serving as routes for evacuation and the delivery of relief supplies when a disaster occurs, in addition to functioning as a space to contain lifelines such as telephone, gas, water, and sewage lines, and telephone.

Road improvement is key to alleviating traffic congestion, Tokyo’s greatest weakness, raising international competitiveness, and realizing a city that is comfortable, highly convenient, and has a low environmental impact. Road improvement is also essential to transforming Tokyo into a highly disaster-resistant city. Roads safeguard the functions of the capital when a major earthquake strikes in areas that include transport of emergency supplies and relief, and rapid restoration and recovery activities. Roads also form firebreak belts, creating a city where fire does not spread. As such, the Bureau is advancing road improvements based on the policies outlined below.

Construction of the Ring Expressways

The Tokyo Metropolitan Expressway Central Circular Route, Tokyo Outer Ring Road (Gaikan), and Metropolitan Inter-City Expessway (Ken-o-do) are collectively known as the Three Ring Expressways of the National Capital Region. The roads not only contribute to the alleviation of traffic congestion, improvement of the environment, enhancement of international competitiveness, and the revitalization of communities, but will also allow Tokyo to continue to function as the capital in the event of a major disaster by facilitating smooth support and recovery operations, preventing transportation between eastern and western Japan from being disrupted. As such, early completion of these roads is imperative. 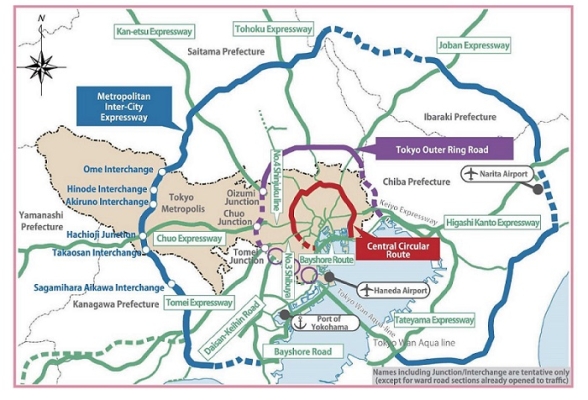 By completing construction of the Three Ring Expressways, the positive environmental effect is estimated to be a 2 to 3 million ton reduction in CO2 emissions annually, equivalent to the amount of CO2 trees covering an area the size of the Tokyo Metropolis are capable of absorbing.

Of the Three Ring Expressways, the Tokyo Metropolitan Expressway Central Circular Route, with a total length of approximately 47 km, runs closest to the center of Tokyo. With the opening of the Central Circular Route Shinagawa Line in March 2015, the expressway is now fully open to traffic. Through the completion of the fi rst of the Three Ring Expressways, the time required to travel between Shinjuku and Haneda Airport has been reduced by half, from about 40 minutes to about 19 minutes, improving on-time reliability, and demonstrating the impact of the project. As a measure to further ease traffic congestion, the Metropolitan Expressway Company Limited is also making improvements to a portion of expressway junctions.

The Tokyo Outer Ring Road (Gaikan) is approximately 85 km long and connects areas within an approximate 15 km radius from the center of Tokyo. By dispersing the inflow of traffic that passes through the center of Tokyo, the Tokyo Outer Ring Road will eliminate the chronic traffic congestion in the Greater Tokyo Area. Through the smoother flow of traffic, which will raise the traveling speed of vehicles on the road, a large reduction in emissions is expected, helping to create a highly comfortable and convenient city.

For the 16 km section that runs between the Kan-etsu Expressway and Tomei Expressway, a deep-bore tunnel structure has been adopted in order to minimize effects on the living and natural environment in the area along this section of roadway. Following initiation of the project in May 2009 the central government, East Nippon Expressway Company, and Central Nippon Expressway Company are moving forward with construction.

The outermost of the Three Ring Expressways, the Metropolitan Inter-City Expressway (Ken-o-do) is approximately 300 km long and runs at an approximate 40 to 60 km radius from the center of Tokyo. The roadway connects core business cities and distribution hubs with the Port of Yokohama, Narita Airport, and other transportation centers, helping to form the regional road network, and plays an important role in the further development of the Tama area and the entire capital region.

In addition to redirecting the fl ow of traffi c away from the center of Tokyo to the Metropolitan Inter-City Expressway, with the opening of these new sections, a variety of eff ects are being exhibited, including an increase in the number of companies along the route.

The route is approximately 2.7 km in total length and runs from Ariake in Koto-ku to Harumi in Chuo-ku. The route will link traffic from the Tsukiji/Tsukishima and Harumi districts that currently uses the Inner Circular Route, as well as future traffic generated in the waterfront district, to the Metropolitan Expressway Wangan Route, improving the traffic situation in the area. At the same time, the route will promote the development of the waterfront, Toyosu, and Harumi districts.

Districts with close-set wooden houses face a number of issues related to disaster-resistance, due to the large number of aging wooden structures and narrow roads (located within these districts). It is also stipulated in Tokyo Metropolitan Government (TMG) damage estimates for an earthquake that directly strikes the capital issued by the FY2012 TMG Disaster Prevention Council that major damage, including large-scale fires set off by such an earthquake, is expected to occur in these areas.

As part of the Ten-year Project to Advance Fire Resistance in Close-set Wooden Housing Areas, the TMG has designated districts especially likely to sustain severe damage in the event of an earthquake, covering an area approximately 7,000 ha (revised to approximately 6,900ha in March 2016)  as development districts. The plan aims to turn these areas into communities that do not burn and where fire does not spread by FY2020. In addition to promoting fire-resistance in built-up areas, the project is also advancing the development of city planned roads (designated routes for improvement) constructed by the TMG (28 sections approximately 26 km in length) which will effectively enhance disaster resistance in such areas as prevention of the spread of fire, evacuation, and relief operations.

In developing designated routes for improvement, it is important to obtain the understanding and cooperation of residents and give due consideration to rebuilding the lives of property rights holders while advancing the project. To do so, the Bureau works to offer extensive support by establishing consultation desks that utilize the private sector, providing information on sites for relocation, proposing plans for rebuilding, and offering consultation on taxes and other concerns of property rights holders. The Bureau is providing assistance based onthe needs of property rights holders, including loans for relocation at a preferred rate and assistance with placement in metropolitan housing and securing alternate land. The Bureau of Construction will continue with construction of the designated routes for improvement, aiming for completion by FY2020.

Roads in the ward area

Ring Road No. 6 (Yamate-dori Avenue) is a major arterial road approximately 20 km long which runs between Higashi-shinagawa 2-chome in Shinagawa-ku and Hikawa-cho in Itabashi-ku.

A project to widen the section of Ring Road No. 6 that runs between Shoto 2-chome in Shibuya-ku and Kaname-cho 1-chome in Toyoshima-ku approximately 8.8 km in length) from the current 22m to 40m was advanced in conjunction with improvements to the Tokyo Metropolitan Expressway Central Circular Route Shinjuku Route and completed in March 2015.

Upon completion of improvements, Ring Road 6 is expected to disperse the inflow of traffic that passes through the center of Tokyo and facilitate the smoother flow of traffic, while also raising the level of disaster-resistance and safety. 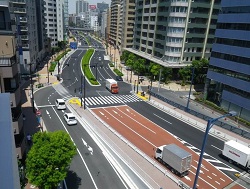 Ring Road No. 6 (Yamate-dori) near the Osaki overpass (Shinagawa-ku)
In addition to  making the roadway four lanes and creating a shoulder, upgrades that also take into account the roadside environment such as the development of sidewalks that provide ample space for bicycles and pedestrians along the entire route and the creation of belts of lush greenery are made.

Ring Road No. 2 is a key arterial road that runs approximately 14 km between Ariake in Koto Ward and Kandasakuma-cho in Chiyoda Ward.

Construction of the Toyosu-Toranomon section, approximately 4.8km in length, is progressing, and the 1.4km section between Shimbashi and Toranomon opened in March 2014.

Ring Road No. 2 will serve to strengthen the link between the waterfront area and the center of Tokyo, facilitate the smooth flow of traffic locally, and bolster disaster preparedness by providing an additional evacuation route.

Redevelopment projects are advancing in districts such as Harumi, Kachidoki, Shimbashi, and Toranomon. In order to respond to the increase in traffic generated by these new developments timely completion of upgrades is essential.

Roads in the Tama area

In the Tama area, main arterial roads that run north-south and east-west are to be laid out in a grid-like fashion.

While advancing the development of north-south roads, including the Chofu-Hoya Route and the Fuchu-Tokorozawa and Kamakura-kaido Avenue projects, development of roads that run east-west such as Tohachi-doro Avenue and Shin Ome-kaido Avenue is also underway.

As one of the north-south arterial roads in the Tama area, the Chofu-Hoya Route (14.2km), which runs from Yanokuchi in Inagi City to Kita-machi
3-chome in Nishitokyo City, is an important route that will contribute to facilitating smooth traffic flow, strengthening the autonomy of the area and
cooperation between cities, as well as enhance disaster resilience. The final section in Nishitokyo City opened to traffic in August 2015 completing the route.

With the opening of this route, along with reducing the amount of time it takes to travel from the Koshu-kaido Avenue intersection in Chofu City to
Sakai in Saitama Prefecture from about 70 minutes to about 40 minutes, it is also improving convenience for drivers by reducing the amount of traffic on metropolitan roads that run parallel to the Chofu-Hoya Route.

As part of improvements, a 10m wide “buffer zone” has been created on both sides of the 16m wide roadway to preserve the living environment
along the route, making the road’s total width 36m.

Within the “buffer zones,” in addition to planting lush belts of greenery, the Bureau is advancing the separation of bicycles and pedestrians and elimination of utility poles to create safe and comfortable urban spaces, and make this a road that complements the creation of an attractive landscape.

On approximately 2.5km of the Fuchu-Tokorozawa and Kamakura-kaido Avenue in Kokubunji City, construction of the road and Seibu Kokubunji Line underpass from Takikubo-dori Avenue to Itsukaichi-kaido Avenue is currently progressing. About 1.1km of the stretch of road from Takikubo-dori Avenue to the Kokubunji 3-4-6 route opened in March 2017. Along with improving northsouth access, the road has had effects such as reducing traffic volume on Fuchu-kaido Avenue, which runs parallel to the road. 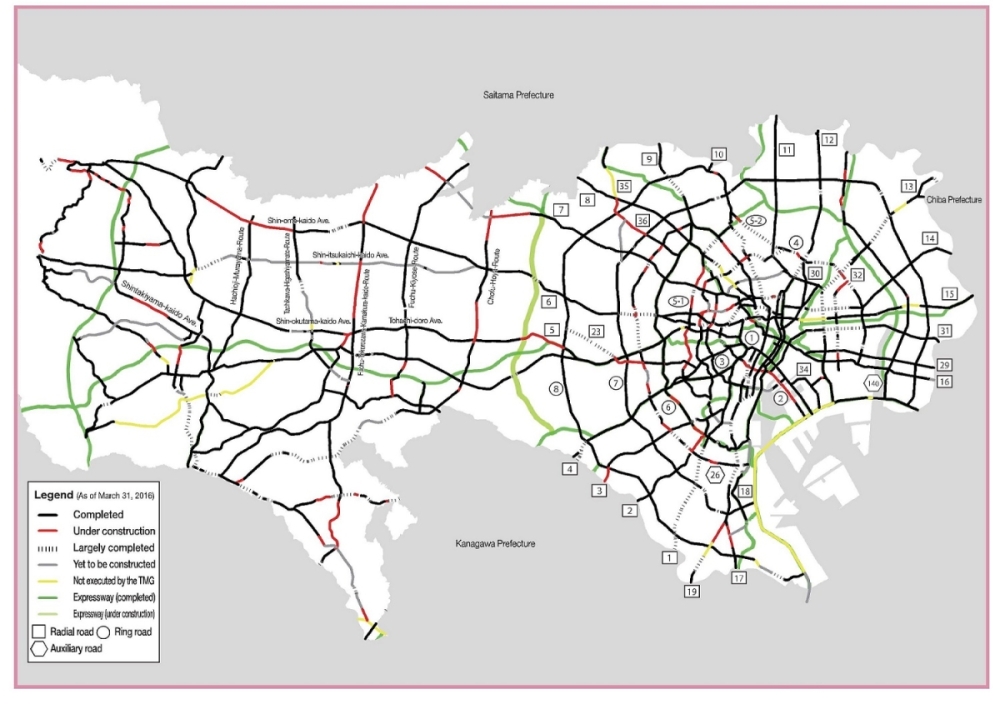