In Tokyo, there are approximately 1,050 rail crossings at present. Rail crossings impede the flow of traffic and are barriers to safely and efficiently conducting urban activities. The Tokyo Metropolitan Government is moving ahead with grade separation projects in order to eliminate traffic congestion at rail crossings and enhance urban functionality and convenience.

As a part of road improvements, these projects elevate sections of railway or move them underground, eliminating a number of crossings all at once. Projects significantly contribute to the development of the surrounding area, alleviating traffic congestion at railway crossings, reunifying communities divided by railway tracks, and facilitating the use of the space below the elevated tracks.

In Tokyo, 43 projects have been undertaken, eliminating 395 railway crossings to date. At the current time, projects are underway at five locations on four rail lines, including the Keio Line and Seibu Shinjuku Line.

In FY2016, projects to eliminate crossings were completed at three locations on the Keisei Oshiage Line (near Keisei Hikifune Station), the Keikyu Main Line and Airport Line (near Keikyu Kamata Station), and Seibu Ikebukuro Line (near Shakujii-koen Station).

The Bureau will continue to advance projects already underway in order to achieve grade separation, as well as work to obtain approval for new projects.

These projects involve elevating an individual road or relatively small sections of a railway to achieve grade separation.

In March 2017, the Kokubunji Overpass was completed where Kokubunji Route No.3-2-8(Fuchu Tokorozawa Route) and the JR Chuo Line intersect,
facilitating the smoother fl ow of traffi c. Currently, projects are underway at eleven locations, including on Kunitachi Route No.3-3-2 (JR Nambu Line)

At intersections with a high volume of traffic, traffic congestion and problems generated by congested traffic, including increased exhaust emissions, are occurring. As such, the Bureau is advancing with grade separation projects that elevate one of the roads or move one of the roads underground.

By elevating the high-traffic-volume Kuramaebashi-dori Avenue Road to create the Shinkoiwa Overpass, the Bureau aimed to alleviate traffic congestion and improve the environment along the road. 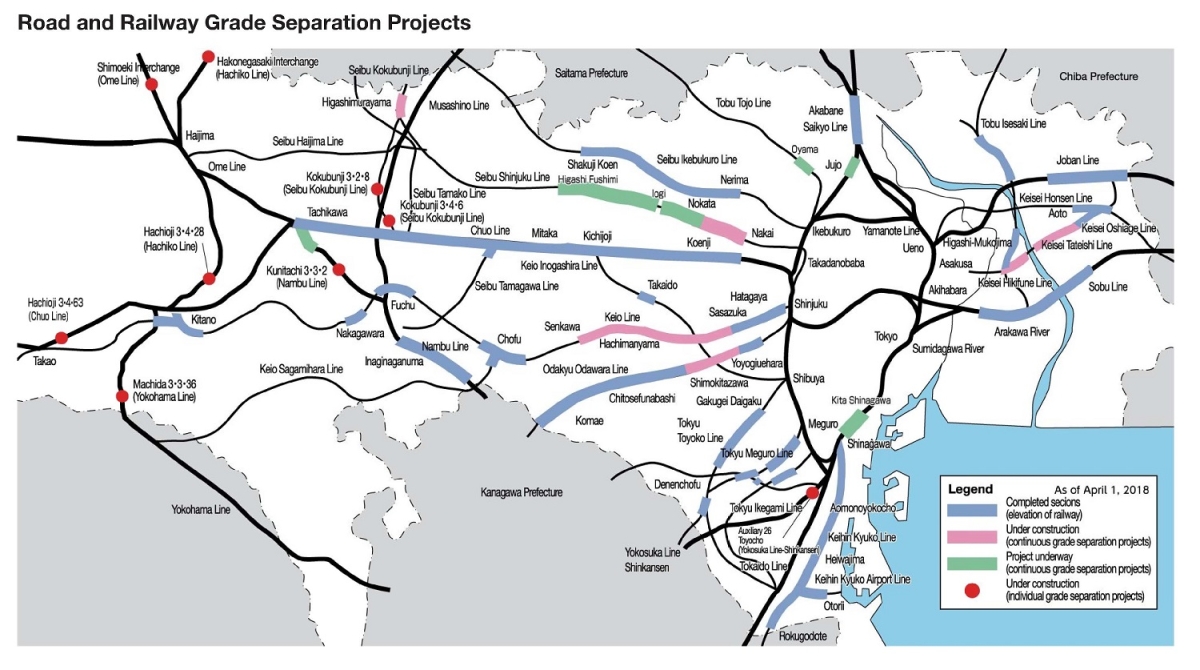