To protect the lives and livelihoods of Tokyo residents from floods due to typhoons or torrential rains, the Bureau has been carrying out improvements on small and medium-sized rivers with the aim of withstanding rainfall up to 50 mm per hour, in areas including urban areas, where people and assets are concentrated.

In recent years, however, heavy rains and downpours exceeding that amount are increasing, causing flood damage.

In response to this, the rainfall criteria were raised to 75 mm per hour for the Kanda, Shakujii and other rivers in the ward area and 65 mm per hour for the Nogawa and other rivers in the Tama area. These are the levels of rainfall with an annual exceedance probability of 5 percent. Based on the new criteria, the Bureau is stepping up its flood control measures according to the priority of each of its projects.

To deal with rainfall up to 50 mm, the Bureau basically seeks to release flood waters safely by carrying out river channel improvements. It also takes other approaches, such as constructing regulating reservoirs, to implement effective measures depending on the situation of each area.

River channel improvements, such as channel widening and deepening, are being implemented on the length of 324 km of 46 rivers in Tokyo, including the Kanda, Shakujii and Shirako rivers flowing through the ward area, as well as the Karabori, Tsurumi and Yaji rivers in the Tama area.

In addition to flood control purposes, the river channel improvements are also designed to make rivers more accessible to people and more favorable to plants and animals. For example, some trails for maintenance are intended to also accommodate recreationists and allow them to enjoy lush greenery, and, for rivers with sufficient space, revetments are constructed to slope gently. In areas where there are many buildings and houses along a river, making it particularly time consuming to carry out channel widening or other forms of channel improvements, the Bureau has been constructing regulating reservoirs to hold excess flood waters and diversion channels to divert a portion of flood waters, so it can quickly enhance the areas’ safety against flood damage.

By the end of fiscal 2016, 28 regulating reservoirs for 12 rivers had been completed, with a total capacity of some 2.56 million cubic meters (including those that were only partially in use), and eight diversion channels for five rivers were built, with a total length of approximately 12 km.

To mitigate flood damage, in addition to five facilities, including the Zenpukuji River Regulating Reservoir put into service between fiscal 2015 and fiscal 2017, the Bureau plans to put eight facilities into operation, including regulating reservoir projects currently underway, by fiscal 2025 to increase the total storage capacity of regulating reservoirs in Tokyo by approximately 1.7 times.(compared with the fiscal year 2013) 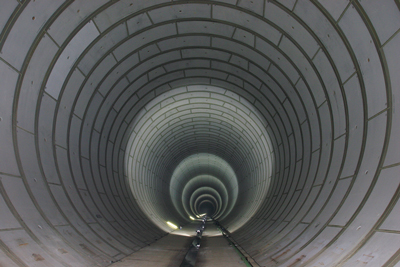