For lowland areas in eastern Tokyo, which have repeatedly suffered from storm surges and flooding, the Bureau’s river improvement efforts focus on installing revetments to protect against storm surges and other hazards, as well as making river control structures more resilient against earthquakes and water intrusion. In implementing those measures, the Bureau also works to create waterfront areas that attract people and provide a bustling atmosphere, by such means as building multiple esplanades that are linked to each other. 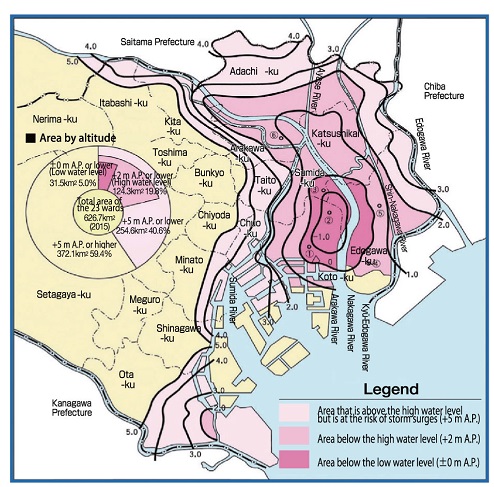 Following the Great East Japan Earthquake of March 2011, the TMG compiled in December 2012 a plan for improving river control facilities in lowland areas of eastern Tokyo to protect them against floods from earthquakes/tsunami, with the aim of maintaining the functions of each facility and preventing inundation from tsunami, etc. even in the event of the biggest earthquake predicted.

The plan states that the TMG will take measures by fiscal 2021 to improve the seismic and/or water resistance of target facilities, which are revetments with a total length of about 86 km and 22 facilities including floodgates and pumping stations. Works are now ongoing on the Sumida River, Kamihirai Floodgate, and elsewhere. 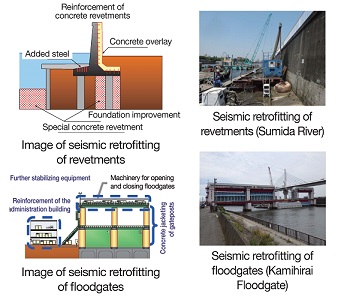 With the aim of protecting eastern Tokyo’s lowland areas from storm surges as big as those wrought by the 1959 Ise-wan Typhoon, the TMG is installing revetments and other structures in those areas, most of which are located east of the Sumida River. Work has been almost completed on the Sumida and other major rivers, and the construction is still underway in areas including Myokenjima Island in the Kyu-Edogawa River.

On the Sumida and other major rivers, super levees and gently sloping levees are being constructed to make the areas better protected against a potential strong earthquake and to improve the riverside environment. Construction is carried out in an integrated manner with redevelopment and other community development projects in areas along the rivers. Also, esplanades are built before the completion of levees to allow the public to enjoy jogging and strolling in waterfront areas.

Projects on the Koto Inner Rivers

In the Koto delta, an area situated between the Arakawa and Sumida rivers, where ground subsidence has been particularly serious, the Bureau carries out projects on the Koto delta rivers to protect the area from flooding caused by an earthquake. For rivers in the western part of the area, earthquake-proof revetments are being built. And, by lowering the water level of rivers on the east side, river channel improvements are being implemented with attention paid to the river environment.

To create waterfront areas that attract people and provide a bustling atmosphere, the Bureau is working to enrich the corridor of water that links the city center and the Tokyo Bay coastal area, centering on the Sumida River, through such measures as making it easier to go close to the river from bridges, building continuous esplanades, and installing nighttime lighting equipment. The Intensive efforts will also be carried out in Ryogoku, and other districts.