Metropolitan parks include nine gardens, which are valuable assets of historical and cultural significance dating from the Edo period. They are all cultural properties designated by the national government or TMG, and among the most distinguished gardens in Japan.

The management and maintenance of the gardens is carried out in a way to ensure that gardening skills are passed down to younger generations. Also, efforts are being taken to make the gardens more attractive and accessible to a wider range of people. For example, the gardens are open on the 2nd and 3rd of January to accommodate visitors during the New Year’s holiday season. Other seasonal programs and events include extended hours during the spring and summer, nighttime lighting during the cherry blossom season and when the foliage changes color in autumn, and holding a “stamp rally” to promote the beautiful fall colors at each of the gardens.

The Tokyo Parks Navi service, a multilingual application that provides easy-tounderstand audio and visual content for exploring metropolitan parks in five languages, was launched in fiscal 2016. The service is currently available at Hama-rikyu and Rikugien gardens.

At the Hama-rikyu Gardens and Koishikawa Korakuen Gardens, which have been designated by the national government as special places of scenic beauty and also special historic sites, the Breau is advancing the restoration of these daimyo gardens, created by feudal lords of the Edo period. 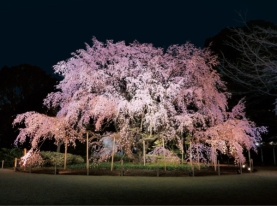