To improve and expand disaster response capabilities with protection of human life as the first priority, the Bureau is promoting comprehensive countermeasures for sediment disasters, utilizing both structural and non-structural approaches.

In areas at risk of sediment disaster, including those in the Tama area and Tokyo islands, the Bureau is constructing sabo(erosion and sediment control)dams, training dikes, frame works and other infrastructure to prevent disasters occurring from debris flows due to heavy rain, mud flows and landslides after volcanic eruptions, and other natural disasters.

Following the disaster, the Tokyo Metropolitan Government established the Oshima Island sediment disaster commission to study countermeasures. The commission, which included outside experts, analyzed the mechanism of generating the disaster and studied matters such as facility improvement for debris flows mitigation.

Based on the commission’s report, emergency measures, including work to raise the height of sediment retaining facilities and construction of temporary training dikes, were completed by May 2014. As short-term measures, works on the mountainside in the area of the left tributary of the Okanasawa River and training dike construction were finished by the end of fiscal 2016.

As mid-to-long term measures, the construction of sabo dams and other projects are currently advancing.

The TMG is in the process of designating sediment disaster warning areas in accordance with the Sediment Disasters Prevention Act* for such purposes as raising public awareness of locations at risk and facilitating preparation for evacuation, and restricting land development in hazard areas.
Act* on Sediment Disaster Preventive measures for Sediment Disaster Prone Areas

In addition, along with notifying the municipalities of the results of basic surveys conducted before designation of sediment disaster warning areas immediately after each survey has been completed, the results are also announced on the TMG’s website and other media. In this way, the Bureau is working for early establishment of an alert and evacuation system such as encouraging the preparation of hazard maps by raising awareness of areas at risk. 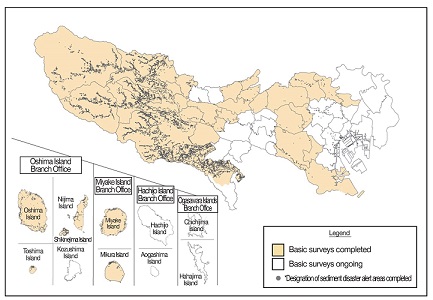 Progress in the Designation of Sediment Disaster Warning Areas,

How a landslide warning is communicated to residents
Back to Top